Chess960: The territory of the Military Knights

Now that I have got some name for the knight pairs in Insider information on the Knight pairs, it's really useful to look at them in detail. First up are the Military Knights. Together with the Chivalry Knights, they make up almost 50% of all Ches960 games so better watch out for them! The military knights have a decent probability of moving beyond their start squares to sit on the third rank and then from there they may stay together for a long time. They occur in 25% of all Chess960 games and hardly ever in standard Chess SP518. Once they are on the third rank, they cover this territory: 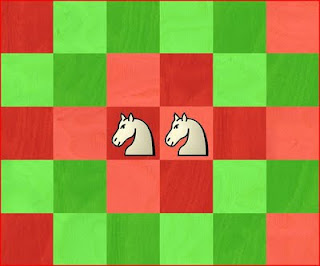 The green squares show where the knights can go and the red squares show where they cannot. If you have this diagram hardwired into your head, you are a lucky Chess960 player because you will win all of the 216 Military Knight starting positions. Notice the blind spots of the pairing? Imagine the diagram as if two real knights were charging along at a quick gallop. Where would their weaknesses be?

The Military knights are:

And so if military knights can move out into position on the third (fifth rank) and hang in there until all the long range attackers are dead, they could hypothetically move forward to the fifth rank and guard a tremendous amount of territory (but always weak to their opposite knights). 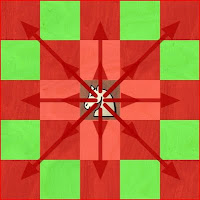 A single knight is:
How The Military Knights split apart or wall defend 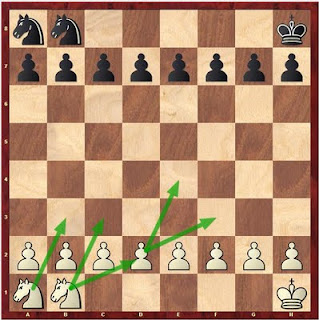 The combination in the corner can be really tricky for beginners! Normally you would think that the corner knight is out of play, but it is not about the corner knight, it is about the pair of knights together. This corner combination of military knights are keenly active. They can move vertically up the wing. They can strongly defend a king that castles c-side and the b1 knight can split away and reach the traditional f3 position in two moves that is normally only accessible by the Hereditary Knight positions on e1/g1.
SP 095: A Sample Military Knight Game
Posted by HarryO at 7:03 PM