Add this Chess960 start to the list of difficult SP's black must face?

Since Chess960 was invented, SP408 has never been played in real world competition. It is a serious intelligence test for black after white plays the move 1.d4. 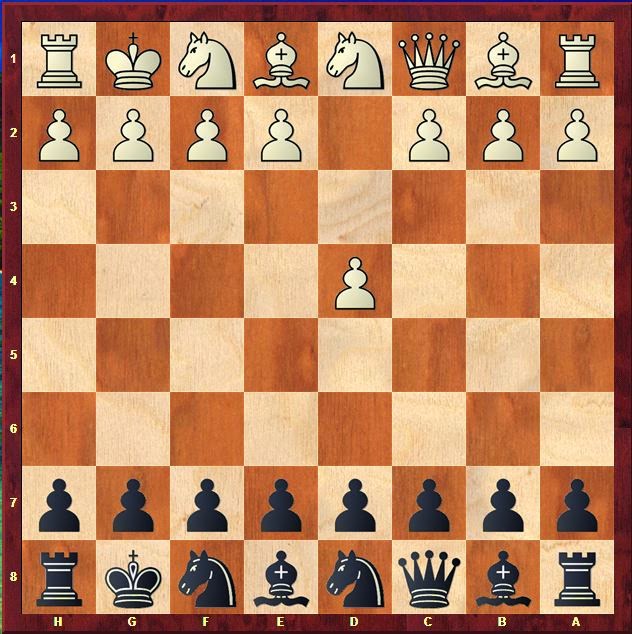 The problem is that the d5 square cannot be comfortably supported in such a way that assist black's development. For example, ...d5/e6 blocks a development square for a knight. If black plays ...d5/c6, yes that frees the dark bishop, but white has natural developing moves that undermine the d5 square:

The big question is, what does black do about supporting the weak d5 square in a way that assists development?

Well since no human has played this SP in competition, I turned to the CCRL database of computer engines instead. The stats are not promising for black with a 62% - 38% win rate for white which is pretty high. A lot of engines, in particular Houdini 4, will try to play this line:

However, I found one game played by Stockfish 5 that I think is a very memorable win for black, spoiled only by Critter's bad opening idea to push the a-pawn aggessively. Stockfish bypasses the d5 problem altogether by appearing to play ultra conservatively minimising any weaknesses, then only later beginning to apply pressure.

This is a stunning opening by Stockfish, as if it were intelligent. Critter is made to look foolish I think!

Nice idea, brilliant! What is this in theory? A counter gambit on a weak square? Ideas like this are never seen in standard chess...
Posted by HarryO at 1:55 AM No comments: