Mostly I stuff up beyond the 10th move somewhere. However the tradition of the "Car Crash Opening" is that the end must come on or before the 10th move. So here is the third classic car crash opening played by me where each move I played is a perfect instruction on how not to play the Chess960 opening.

SP390: Black and the problem with the traditional move E5. 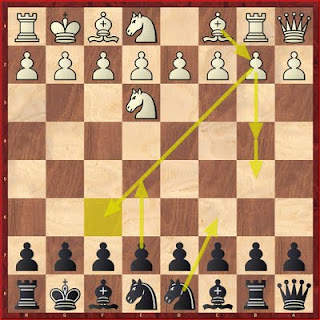 White has played the awkward move Ne3 which immediately reflexes black into the brainless move 1....e5?!. The problem with 1....e5?! is the issues that are highlighted by the yellow arrows. The e5 square will come under heavy attack by white's minor pieces and after white plays the space gaining move b4, any attempts to defend the e5 square are in themselves undermined. Black's alternative play is then e5-e4 but this is ineffective and wastes development time as well. The other alternative is to back up e5 with f6/d6, but this is too passive against white's strong centre play d4.

Well puzzle six was a tricky one! Biff says that at least he got part of the answer up to the third move. Here is another really difficult "Catch The Knight" problem that comes from a real Chess960 game!


SP379 Black to play move 10 (castling permitted):
Can the knight be caught cleanly without loss? 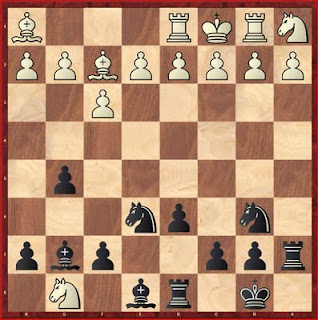 Problem level: Difficult
Answer: yes or no?
Solution: somewhere on this page

Therefore the answer to black's best shot in the puzzle is still no!
The puzzle solution is: no, white's knight cannot be caught without exchanging it for another piece
Posted by HarryO at 7:55 PM 1 comment:

Wow I'm in shock, I've finally got four followers. Thanks for helping to encourage this continuing blog on Chess960. Please do whatever people do to show me that you are reading this blog because blogging is hard work if you want to make it reasonable quality. The readership of this blog is by far dominated by the spambots especially the "toothwhitner" spambot, but at least with the occasional human follower joining in, I can have some confidence that people are reading this. The Googles metrics are useless because of the spambots. I do wonder whether Google Inc is not removing the spambot effect on the metrics, because it gives blogging novices the impression that someone is reading their blog, when in fact no person is.

Ok onto a ridiculous situation that I got into in Chess960 a few days ago in what was a real game!  It makes a great Chess960 puzzle but be warned, it is way more difficult than it first appears! The solution involves a lovely twist in the plot! Here goes:


SP373 Black to play: Capture the Knight! (castling is permitted) 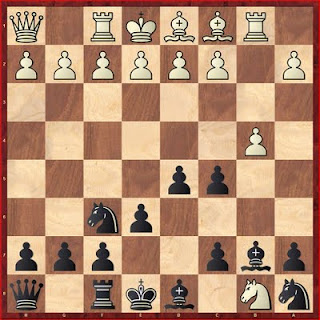 Solution is given somewhere on this page.
Be warned it is really tricky. Enjoy 960!

Chess960: What do you say about Ceremony?

Been looking for something to post on a particular arrangement of the knights in Chess960 called "The Ceremonial Knights". The idea by calling them "ceremonial" is that in real history there was a similar type of knight that did not show itself in battle except as a ceremonial gesture. In Chess960 the Ceremonial Knights are so far apart from each other (5-6 squares), that they are either both in the corners, or at least one of them is. In that configuration they often do not start contributing to the battle until later in the game. However that is not always the case! Sometimes the ceremonial knights will operate independently and harass the 7th rank of the enemy on the side of the board that they live.

Here is a nice example of how to quickly stop the less extreme version of the Ceremonial Knights from ever moving forward with purpose, with one simple move:


SP337: How to put the Ceremonial Knights on Ceremony! 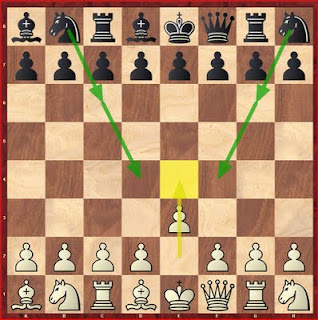 The suggestion I am making here, is that in this case, I think e3 is a very good move. If you can see how the knights play out towards the centre, that one little pawn on e3 completely stops the ceremonial knights from moving forward quickly. It also happens that the move 1.e3 also releases the bishop and queen, but that is not the only motive. I would say that if white would have played 1.e4 by automatic reflex as we do in traditional chess, it would not have been nearly as good a move.
The point to remember about the knights in Chess960 is that I personally believe and have experienced it many times, that the knights can move forward very aggressively in Chess960 much more than they can in traditional chess. This is because there are often many more holes and weaknesses inherent in the position that the knights can use as an outpost much sooner in the game.
Note that in the example above, the other possible configuration of knights that might cause the move 1.e3 to be as effective, is if instead of Ceremonial Knights, you had the "Chivalry Knights". But if you think about the Chivalry Knights that are either in the form N.N or N...N (transforms to the same configuration once developed), one of the chivalry knights would have to develop away from the centre in order to reach the same configuration that the ceremonial knights are naturally in once they develop. But in reality, it is very rare that players will develop a knight in a direction away from the center!
Thus this is more confirmation of the goodness of the naming of the knights pairs. The Ceremonial Knights are often truly ceremonial, and the Chivalry Knights are never ceremonial, but truly active and forward moving dangerous knights that get into the thick of it sooner rather than later.
Enjoy 960.
Posted by HarryO at 3:58 PM 1 comment:

Bobby Fischer was a genius and so often he used language in a way that we are not familiar with. We think we understood him but actually we were not listening, we were just operating off our own assumptions of what we think he meant. One of the biggest controversies is what Bobby meant when he talked about "pre-arranged" chess games.....

The idea of "pre-arrangement" is that as Bobby noted, it should be stated up front (acknowledged rather than blindly accepted). What is the difference between playing from an opening book in your mind, compared to if both players actually used a physical opening book as they were playing through the opening?

If there was a physical book, everybody would be clear about what is happening. As it is now, the book is in human memory. But what is the difference? It is just the quality and the quantity of the recall drops. But actually the quality of recall even in human memory is quite excellent for quite some time in the chess opening. The quality drops away as the limits of the quantity of stored information is reached.

But it does not change the fact that the game up to the point of the breakdown in recall, was proceeding according to pre-arranged knowledge. There is no problem with that except that it should be acknowledged and discussed rather than blindly accepted.

People might say "but we don't know when the recall broke down in the players head and that the player is then thinking at the moment and so how do we know that it is pre-arranged?" That is a good point! However there is a strong possibility that rout memory techniques are increasingly being used in the computer age right through from GM's to amateurs.....

Yes I hear the critics out there saying that even Chess960 is pre-arranged in the sense that we learn concepts and commit them to memory from previous experiences and even from books. But the "pre-arrangement" is one of learning concepts rather than specific moves and there are a variety of different forms of memory being used during the Chess960 opening.

Yes I hear the critics out there saying that even when they are memorizing openings in traditional chess, they are still learning concepts about chess. Now that is true, but the concepts actually are a side line activity to the physical act of memorizing. Even at GM level the GM's are finding new memories to commit, based off specific tactical or positional issues. Yes even they are still learning a concept of some kind but where is the balance in the variety of ways of thinking during the traditional opening?

Chess960 is a cultural revolution that is under way. It encourages on the spur of the moment application of concepts in the way that we think. It contrasts different ways of thinking and allows a variety of ways of thinking. You can purely work of concepts that you have, or even memorize specific lines in some cases.

It is a revolution where we humans discuss the nature of conceptual thought relative to specific memories. In psychology they call it "procedural memory" verses "declarative memory". Procedural means "Concept" and declarative means specific declaration "King pawns opening means e4-e5".

I put it to you that ultimately it is all about memory. It is just that during the Chess960 opening, 960 actually uses the human mind in a variety of ways, reaching into skills and memories from many processes in the brain during the opening phase.

That is my belief.

Here is the real crunch line. Chess960 uses one process in the mind that is hardly ever used in traditional chess any more. Chess960 is so huge in extent, that you simply cannot claim to be "proud" unless you are deluded. The sheer quantity of possibilities in the Chess960 opening encourages a process of humility in the face of situations that are difficult to anticipate even for a genius like Bobby Fischer.

Cheers
Posted by HarryO at 2:57 PM No comments:

Chess960: How to practice it - part three

Thanks to BiffMeatStick I've still got a little bit of enthusiasm to blog on....People don't realise how much hard work it is to blog, and that whatever ideas you come up with, they will get pinched by someone else in any case. Even if they do not, the readership statistic feedback you get to encourage you to keep blogging, is usually corrupted by the Spambots that mindlessly read your site with enthusiasm!

The basic idea of this Chess960 practice discussion, is that there are critical checks that have to be made before the start of the game, but not all of the checks have to be done on the first move. The idea is to distribute the burden of having to analyse the start position into the opponents time just a bit, because by far on average, some critical start position features are not adversely affected by the first move itself.

The summary from Chess960: How to practice it part one:
Before the Chess960 game starts:

The summary from Chess960: How to practice it part two:
Before the First Move:

The summary of ideas in how to practice Chess960 part three are:
Before your Second Move:


I'd normally draw illustrative pictures to back up my arguments, but unless BiffMeatStick (or anyone else) want's me to I'll skip it. Let me know.
Enjoy 960
Posted by HarryO at 3:28 PM 2 comments: