In this run through of SP749, the engines and CCRL database are indicating that white has a significant start advantage. Playing as white, I tried an early development of the queen. The idea did not work out all that well. Yes the queen can come out early in this SP because there are many squares that cannot be attacked. However, she is not all that effective unless well supported by other pieces. Here is a key moment: 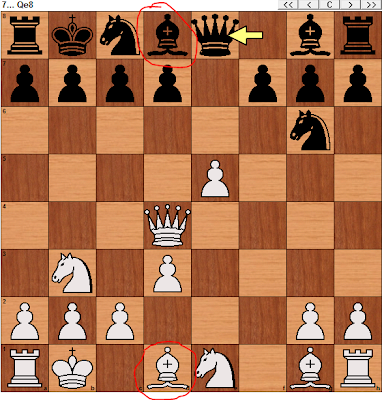 This is a key moment because white has pushed back black's knight to the back row, and I assumed that yet another move where black does not advance forward and develop, would have to be crippling. However, black's move 7....Qe8 simultaneously defending d7, attacking e5 and indirectly controlling the e-file was amazingly effective. White's queen is now without a target and she blocks the g1 bishop. White could play Nf3 but that would block the d1 bishop.

In this trial, I never solved the problem about what to do with the d1 bishop. Bg4 is obvious, but more difficult to achieve than I thought, since black has counter-play; the very thing I was trying to stop by the hyper rushed queen attack. Note that black's equivalent bishop on d8 can get to g5 but in black's case, there is no knight that impedes it's path there.

Good luck to the future generations of Chess960 players playing this SP as white or black. Is there a forced win for white? I think black could well be OK in this SP for at least a draw, but it is going to require memorization of the basic concepts, otherwise in practical play black will run out of time on the clock.
Posted by HarryO at 11:02 PM 30 comments: