This time we are going to work through the first ten moves of some of the SP's Mark found in this post to be possibly dangerous for black. First up is SP408 = RBQNBNKR.

This SP is really "diabolical" to quote Mark. White's first move 1.d4 has so many good things about it including:

Black on the other hand has no such luxury. As Mark put it:
"First, the minor pieces don't coordinate well. The Knights are competing for the same square on the e-file and the Bishops have no obvious optimal deployment. Second, the weak e-Pawn, which is not easily defended, is easily attacked by the Knights. Third, the castling option is limited; the King has to stay on the h-side."

The question is what can black do about 1.d4? At first we followed the CCRL database (see "cool links" top right). One possibility is for black to build a dynamic safety net around his king thus:


The variation above is now scored at almost 0.00 by Houdini-2c. This is where it get's interesting. Mark has decided to forget about the CCRL database altogether and play by gut feel! So we have the situation 1.d4 d5!? a symmetrical opening and not one engine in the CCRL database even considers this move. Houdini2c scores white's lead at almost half a pawn.

After the almost automatically good move for white 2.c4 Mark finds what I think is the needle in the haystack 2....Ned6!? that saves blacks position at least for longer. Studying the continuations after this move, I found this surprising line that actually does produce the possibility of long side castling for both colours!


SP408 Hypothetical: Long side casting both colours is possible!

Now at move 7 in the real game, clearly white has all the initiative (see below). I played 6.e3 which is strictly not a developing move but it sure is a positional move. This actually has given black a free tempo and here at move 7 Mark actually uses it!


SP408: 7...b6, what does it achieve?
The move is sure got me both interested and a bit stumped for now. 7...b6 seems not to aid development and the c5 pawn doesn't need protecting yet. Also, a tempo is lost if later ...b5 is necessary. Perhaps it's a case of black not having a better move? Here is Mark's thoughts on it:

After this move I played 8.Qc2 a very simple developing move that also waits to see what black does. White doesn't want to castle yet in case the h-file opens and doesn't want to move the e1 bishop until the c3 square is cleared. Notice the important feature that white has, a free clearance square or intermediate square on e4 to park a knight so that the c3 square is cleared. This is typical Chess960 stuff where we need a free square so that our position can be improved.

Again another interesting move by black. I think if black would have played 8....Nxg3 the opening of the h-file would have been a fairly serious problem for black since white is just continuing development and pressuring the king side.

However now after 8...Nd6 I'm studying the crazy possibility black has of playing ...h5/h4/h3!? and potentially developing the rook to h5 as well as disturbing white's kingside! Take note that the edge pawn rush is a very common feature of Chess960 when a knight sits on Nb3/Nb6/Ng3/Ng6 and get biffed by the edge pawn. The pawn then marches on to undermine b2/b7/g2/g7 in concert with a bishop or queen on the long diagonal! But that is not the reality in this SP.

Here is a special milestone reached in this trial game, black has played ...f5!?, a really interesting move to say the least. How can such a move work with black's b8 bishop blocked in while all white's minor pieces are aiming at the king. 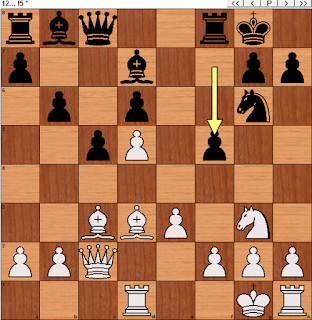 After 12...f5 I castled g-side. Mark's immediate comment was "...I was surprised to see White castle. I expected h2-h4 at some time, using the h-pawn to disrupt the h-side". I then tried the idea of a4/b3/Bb2 to keep long term pressure on the long diagonal.

So here is the final position reached in this trial: 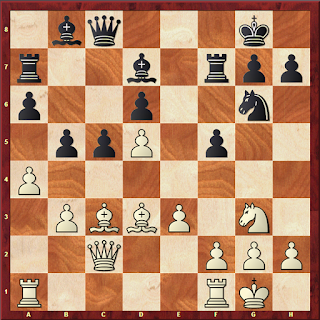 My own thoughts are that black has defended amazingly well. It is remarkable that both black's rooks have had to transpose to the 7th rank so early in the game. I think the difficulty is that although black's piece position is compromised, white has only created one weakness when two are needed. Mark's comment at the end of the trial were:
"...The Bc3 is certainly a better piece, but the difference between the two positions is probably nothing more than the difference between these two bishops"

Lastly, please see the comments to this blog for the details of what we were thinking move by move in this trial run at the very difficult SP408 where white calls all the shots and black is very much in the hot-seat.
Posted by HarryO at 2:09 AM 42 comments: