Eh Chess960 people. I started a thread on how to practice Chess960 a few weeks ago and so thought I'd continue the idea today. Here are some ideas on how to quickly read a Chess960 start position which is particularly useful for blitz or rapid chess games. The steps below do not take long to do once you practice them!:

Step 1: Find the knights quick attack points on the opponents 7th rank. I already explained how to do that here: Recognizing the 7th rank knight attack points by pattern. Essentially you look at the 7th rank squares one square displaced from your knight.

Step 2: Ask the question "are there "Chivalry Knights" in the start position? To help remind you, Chivalry knights exist in two forms NxN and NxxxN. If so then here is how to quickly determine the pawn moves you should be very skeptical and cautious about playing:


SP257 Chivalry Knights: Make these pawn moves and you will leave holes! 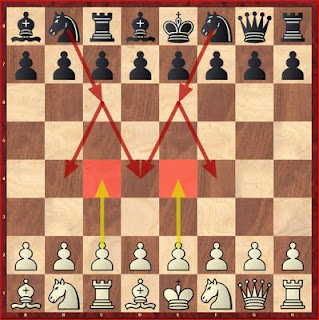 The way to quickly find the dangerous pawn moves, simply see the two red squares in your mind relative to the position of the chivalry knights. Here is another example:


SP160 Chivalry Knights: Make these pawn moves and you will leave holes! 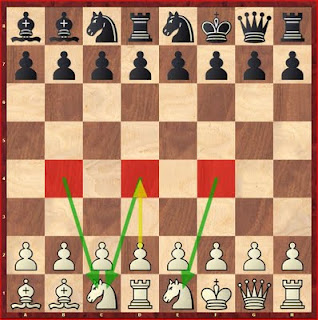 Step 3: Is a bishop next to my king? If so, then prepare for a diagonal attack!  A very simple check is to ask this question! Then you will be ready to plan for the diagonal attack before it comes: 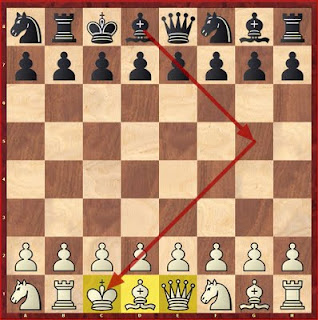 The most critical situations for a diagonal attack on the king is when the bishop is both next to the king, and the king is either on the C, D or E squares. On those squares, the king can be open to attack in many complicated ways. However the relative position of the bishop directly next to the king, is the biggest give away. Note that the traditional start position is one example because the bishop is next to the king and the king is on the e-square.
Step Four: Is there an undefended edge pawn? If there is, then have a quick think about how much of an issue that could be. Usually the edge pawn is not an issue unless there are pieces underneath it or adjacent to it that are undefended. In those cases there can be some tactical problems but even then, with some simple preparation, most of the tactical plays on the edge pawn do not work
Putting it all together:
Here is an example of putting the above steps 1-4 into practice:
SP262 Blitz Game: Where are the critical points? 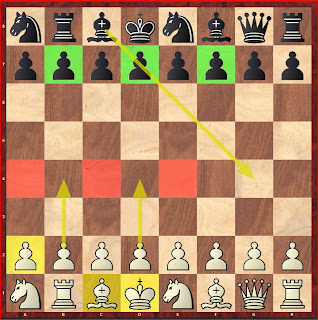 Having done those four steps, the most critical analysis of the start position is already done. Now comes the time to make a move!
Step Five: What pawn move to make?
The opening pawn moves are a big aspect of the art of Chess960. There are many choices and possibilities for both sides. Sometimes it is even better to play out a knight first (but not often!). Mostly it is best to play a pawn move followed by a knight move, then followed by another pawn move. For a more detailed discussion of the pawn moves, see:
Naming the Pawn Moves
Enjoy 960
Posted by HarryO at 11:07 PM