I think there is a legitimate new strategy in Chess960 that does not appear nearly as often in Chess. It is the art of deciding when your own position is so twisted up, that the only option is to mutually twist it. Sometimes a Chess960 player will experience a sudden brain cramp that both players are simply not prepared for. The idea is so bad and so dysfunctional, that rather than causing an instant resignation by the brain cramped player, the position devolves into a strange and completely unworkable position that neither player can respond properly to any longer. Thus the brain cramped player is spared from defeat by the art of the "Dysgenic" draw. Unlike a stalemate, a "Dysgenic" draw occurs when the players can still make moves, but the position is so unworkable that any moves would be utterly pointless.

In Wiki the definition of Dysgenics is:


Dysgenics (also known as cacogenics) is the study of factors producing
the accumulation and perpetuation of defective or disadvantageous genes and traits
in the offspring of a particular population or species. - Wikipedia

As is often the case when I stumble across a definition in Wikipedia, the description is so good and accurate of the Chess960 equivalent, that I simply cannot add or improve the definition. All I can do is to recast it in terms of Chess960:


Dysgenics960 (also known as cacogenics960) is the study of factors
producing the accumulation and perpetuation of defective
or disadvantageous moves and positions in the offspring
of a particular population of start positions. - HarryO
Here is a classic example of how a "cacogenic" position emerges in Chess960:
SP247 Black to move: The penultimate moment of devolution 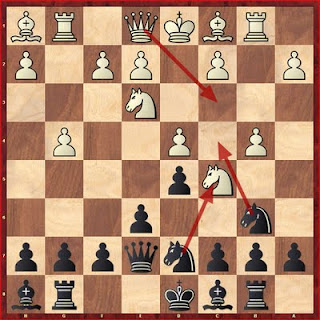 Here playing as black in a blitz game, I was so cramped up and the start so poorly coordinated that there was little contribution that I could make except to devolve the position. I came to the brain cramped conclusion that NxN/Nc5 would probably be ok. Therefore in this brain cramp state I proceeded with the plan, but faltered (thankfully) before the final moment of execution. Here is that moment:
SP247 Black to play: The Dysgenic Strategy 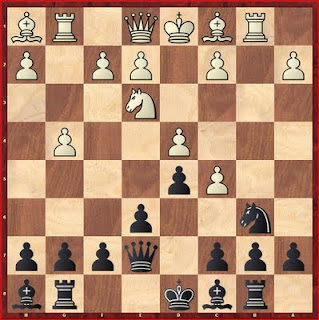 By sheer random luck without any degree of thought at all, I stumbled upon a new Chess strategy. Nc5 was a terrible idea, and so instead the game went on:
7)      ... Nd7!  The dysgenic strategy begins
8) g5   ...       White wants to keep black twisted and depraved by preventing Nf6. At the time I thought this was a very good idea by white and secretly congratulated them silently but with muttering under the breath.
8)      ... g6    Black decides that because there is nothing that can be done about the mangled position on the c-side, then simply continue development.
9) Qc3  ...       White is forced to protect d5 (Qb4 or Qd2 do not work)
9)      ... f5    Knowing that en-passant on the f-pawn is not an option for white, the idea is to try and devolve the position more generally via an old hedgehog strategy that is now cast as a dysgenic strategy.
10) Ba3 ... Qg7!   Black has successfully devolved the position!
SP247 White to play: Draw due to dysfunction Ok so what has black achieved in this dysgenic strategy?
The game was drawn here in this informal game and I sincerely respect my opponent for this! They were such a better player than myself in this blitz game that they could see that there was no point in continuing. Just look at this one single bizarrely devolved continuation:
11.c6?! bxc6 12.Rxb8 Nxb8 13.Bb2 Qd7 14.Qb3 Na6 15.c4 Nc5! 16.Qa3 Ne4! Beautiful but totally crazy.
White is in a kind of a "zugswang" situation but with the distinction that they can move, but that there is no point in moving. This is the essense of the dysgenic strategy in Chess960!
Let's think for a moment what white's options are:
SP247 White move 12: A sublimely dysgenic hedgehog position 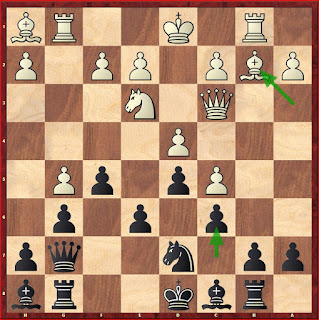 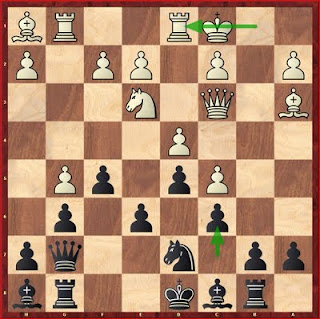