Well SP941 "The Bacrot Catastrophe" continues it's amazing journey. In the past both here and at Chess.com I've been referring to this position as a "brutal" position based on what happened with Etienne Bacrot in 2005 based on this starting position. Thankfully Mark over at Chess960(FRC) Chess960 Chaos has checked out the position as well as a commentor "Ichabod" on that blog. The point is that we are all using engines of various kinds to nut out this amazing position up to 20ply deep but black does have good chances to draw in this position and counter attack at the slightest slip up!


The reason I'm posting is that I think that Ichabod is onto something with 1.....e6!? in SP941. Here is the framework of the defense as I see it:


SP941 White on move 3: The Ichabod Defense (modified by me) 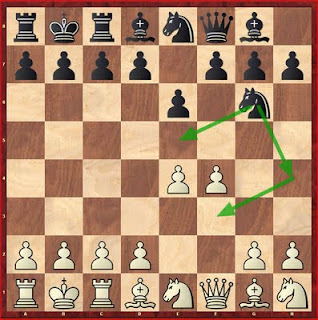 White has moves like c5 but where does that actually lead to?

What do I think are the standout features of 1....e6!?
What do I think are the standout features of 2....Ng6!?
I think the critical point about the "Ichabod" defense is that black must try really hard not to play ....f5?! at any stage. Why is that? Well not only does it suggest a backward pawn for black at some future point. If you look at the diagram, ...e6 blocks black's light bishop hmmmmm. However!, black's light bishop has a beautiful escape path via h6/Bh7 which is an attacking move against white's king! Therefore simply black should try not to impede this attacking option as ....f5 does. I realize that all the engines including mine all suggest ....f5 for black at some stage but in his position I think the engines are almost entirely useless except to help seek out gross errors. The position is actually perfect for the trained Chess960 human eye both on attack and defense and that is why Aronian as white absolutely drank up this start position (he would have also beaten the engines as well in this start position I think).
I could go on and on about this start position, but I'll finish with an amazing exchange sacrifice line that I found for black in this start which highlights the incredible exchange sacrifice possibilities that exist in Chess960:
SP941 The Ichabod Defense: Black counter attacks! (Well done black!!!)
After seeing that variation it is clear to me now that Chess960 is the future of Chess! Maybe not this generation but in another one or two! It is incredibly beautiful, very exciting, wonderfully imperfect, completely bizarre, endlessly fascinating and a simple yet complex game that endures for life time without needing technology to play. Not only that, but Chess960 encourages both types of players, the one's that like to research and memorize, as well as the one's that like to fly by the seat of their pants and get creative.