Chess960-SP233: Have some fun with the Titular Bishops

Firstly what are the "Titular Bishops". As per this blog on Naming the Bishop Pairs, the Titular bishops are a variant of the Patriarch family of adjacent bishops that cover almost 50% of all Chess960 games. According to the Wikipedia on Titular Bishops:

"A titular bishop in various churches is a bishop
who is not in charge of a diocese." - Wiki
Now that so perfectly represents the Titular Bishops in Chess960 that I cannot really add to it. The starting positions with the Titular's in them are very rare (only 6%) but when they happen, the game becomes very subtle. This is because in the case of these bishops, it is often much better to play d3 or e3 rather than d4 or e4. There is a huge variety of interpretations on how to play the Titulars, because they can operate in so many different ways according to theme. Let's hope and pray that if it is true that FIDE is considering a reduced set of Chess960 positions for the future of Chess, that they include the Titulars! They simply must do that in my opinion.


Ok onto an example of a great introduction to them that I stumbled across yesterday. I was playing as black and made a poor pawn "free move" to begin the game (please see Naming the Pawn Moves for the definition of "free"). White had started the game with 1.Nf3!? and only now I can see why. White has broken the general 960 opening principal of playing a "free" move before a knight for a good reason: 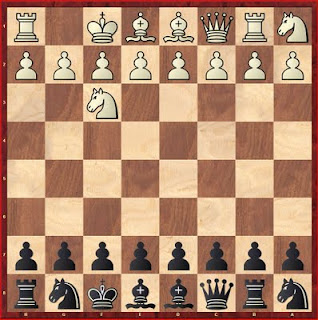 Basically white has decided to implement a general plan very early in the game. The idea is that black will castle g-side and so white will combine the Titular Bishops to direct an attack on the g-side while simultaneously gaining space on the c-side and possibly deploying their knight against the g-side king, or morphing it into a unique knight outpost in the center that is possible in this SP, as I will show. I was completely thrown by white's first move and then reflexed what seems to be a naturally good move:
1....d5!?
But d5 is not necessarily a good move in the Titular SP's for a number of reasons! At first it looks good because it gains space in the centre and free's both the queen and the light titular bishop in one move. But it actually leaves two great big holes for white's knights to jump into at e5 and c5 as I will show. Not only that, but 1...d5!? can also reduce the options of how to deploy the titular bishops most effectively.
Here is white's overall plan:
SP233: White's general plan after 1....d5!? 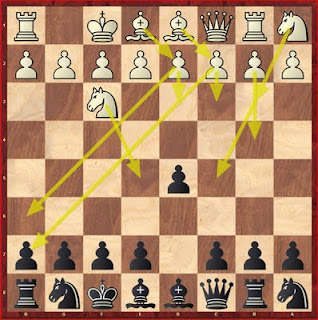 Notice how white get's two semi-permanent knight outposts at e5 and c5, simply because both white's knights are perfectly positioned to get to them there and because black's opposition pawn moves to the outposts f6 and b6 are unlikely to be played out. If black plays them out, they impede black's knights from developing (unless black can think up something else) 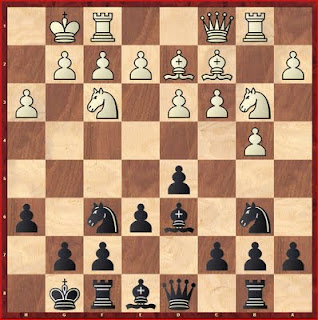 Black is not out of the game by any stretch! However although it is a matter of interpretation, white certainly has both the move and the initiative. The standout features for white are:
Notice the point about the Titular Bishop openings? There is not necessarily any gain to be made in playing the typical space gaining moves in the center as we try to do in so many other SP's.


So here is the insiders information on playing the Titular Bishop openings: Get it out of your head that you need to make quick space in the center. In many cases you simply need to move a pawn out one square to free the Titular's effectively, and by so doing you give them more space to operate.


The Titular Bishop openings are a lot of fun! They are the philosophers openings because so much of their operation is a matter of interpretation! I wish their were more than just 6% of games with them included, but 6% is as good as it will ever get. Please FIDE, let the grand-masters of chess play these starting positions in opening competition one day ok?
Enjoy 960
Posted by HarryO at 8:19 PM