I decided to check out Mark's blog on SP941 at "A Chess960 Catastrophe". Originally I was going to write about the opening that Etienne Bacrot played against Aronian as an example disaster opening of how not to play Chess960. What I actually found is that back in 2005 Etienne stumbled on what I think could be amongst a few very very tricky SP's for black to play and even worse it was against Aronian! SP941 is honestly the only SP I have so far seen in an ongoing systematic study of them, where after 1. e4, all the lines that Rybka4-960 tries to find are all +/= for white! That does not happen very often at all (note: extremely rare).

Ok let's look at what happened. Etienne actually played very well considering. Unfortunately I believe that in future years, there will be a list of a a couple of dozen SP's that black will have to commit to memory on how to play the first move. So don't say there is no memorization in Chess960! Essentially the statistics on the numbers of these hyper-dangerous openings for black are so minor that it is not an issue. 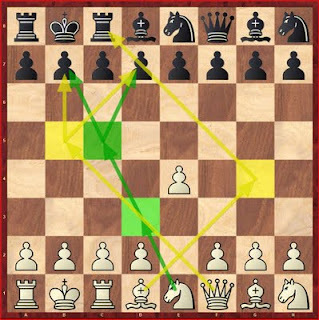 The central problem for black is that white is threatening at least three different tactical motifs! The most serious is a mate threat on b7 and a knight fork on d7. In this SP, black simply must react correctly or things get ugly very quickly. The way that Etienne deals with the issues is very skilled but fatally flawed:
1. e4   ... e5?!  Black does not respond to the tactical problems and also creates problems with the undefended pawn becoming a tactical motif of itself.
2. Nd3! ...       Now here is the point about Chess960. Black only get's into trouble when white finds a counter intuitive opening move. No one would normally play Nd3 unless you were Aronian perhaps!
2.      ... Ng6?! What can you say? Correct but flawed.
3. f4!  ...       White now opens the dark diagonal and attacks e5 but also combines mating and forking threats.
3.      ... Bf6?  Black cracks under immense pressure. There was no acceptable move from here and black is lost. Perhaps black could have played 3....c5!? Note that even Rybka4-960 would probably have lost to Aronian in this SP.
Ok so what do we do about the tragedy of the Bacrot catastrophe!? Essentially put away the computer unless you have got a long time because the computer cannot see the long term complications. I have had to think of a solution myself, and believe me it is counter-intuitive! Now do not get me wrong, I'm not saying that Chess960 is perfect! What I'm saying is this:
SP941: One Retrospective Solution to the Bacrot Catastrophe 2005 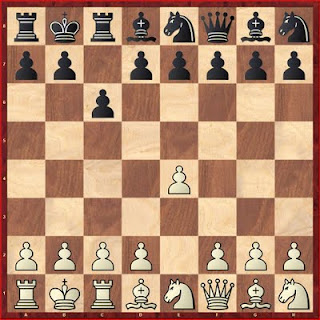 1. e4    ... c6!?  The computer cannot see this move, only the human eye. The idea is to extinguish only one of white's tactics Nc5/Qb5# and then continue to hose down the less serious problems while simultaneously continuing development in an a-typical way.
2. Nd3!? ...       What is the problem with this move? If the tactics can be extinguished, then it simply blocks the d-pawn.
2.       ... Bb6!? Black puts a hose on all the tactics. I think this move solves all black's problems good enough for a draw...
The point is that if white decides against 2. Nd3 with:
2. Ng3   ... e5   And now we get Etienne's idea but white cannot play the same tactics anymore because the devastatingly strong white move f4 is taken away. Note that white cannot play d4 because their initiative is immediately dissolved because they expose their rook to ...Ng6/Bg5.
3. Nd3!? ... Ng6  And black can get away with a draw.
SP941:  1....c5?! contrasted against 1....c6 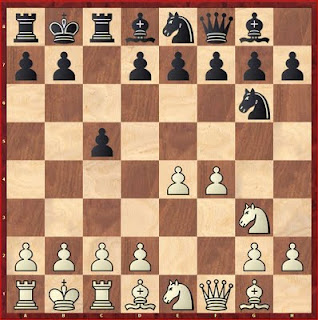 In this version, black plays 1....c5?! and white decides against Nd3. It's a difficult option for black to play and I doubt that it works. The issue is that white can take the long light diagonal against the king and black has no natural defense of it and then you get BvR in the corner. Not only that but the two bishops work together against the king with the queens support on b5. Forget about c5 I'd say!
Phew! Occasionally Chess960 is brutal in a few percent of the 960 different openings. By far most of the SP's have plenty of options for black. The interesting thing is that a game like this catastrophe happened six years ago. I suspect that grand-masters may have decided that Chess960 is no good because of a rare example like this. I beg to differ until someone actually proves that black cannot fight back to equality. Having looked at SP941, there is a way....I think....c6!? but it is not ...c5?! Another avenue of thought is 1....f6 or 1.....f5.
Enjoy 960!
Posted by HarryO at 3:58 AM