Here's a nice clean example of the military knights in action. In standard chess you don't see it very often but in Chess960 you can. As Michael from Patzerchess.com says of SP518:
"Knights on outposts can be devastating. Look for outposts (squares on the 5th or 6th rank that are protected from enemy pawns or other pieces) to plant your knights on. From a protected outpost, a knight can really hinder your opponent’s development."


Well in Chess960 you can magnify that effect very quickly if you are not careful with a pair of Military Knights! In some SP's the Military Knights can move out in front of the pawn wall and guard the king on the 3rd rank very well. But when they come out onto the 5th rank and control the 7th rank they can do a lot of damage and that damage comes sooner rather than later! In this case, black wins a rook in all lines because white's 2nd rank is so weak (combined with the pin on the queen): 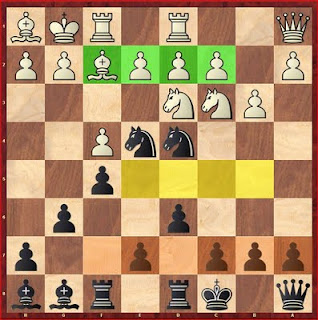 It's really worth studying the Control Diagram of the Military Knights and learn how the military knights control the squares around them. The point is that if they get onto the 5th rank, their clean control of the 7th rank can be deadly. Notice that white's corresponding military knights are much less effective even if they could deploy to their 5th rank. What pressure would they put on the 7th rank that black cannot deal with?