Chess960: Odd midgames or not?

As for the question whether with absolute best play, does Chess960 produce lots of unusual mid-games relative to traditional chess, I cannot answer. The question will be resolved after lots of Chess960 has been played and then compared with the huge traditional chess database. Another possible way to go, is to compare the CCRL FRC database with the CCRL traditional database.....The idea would be to search both databases for unusual midgame piece combinations that mathematically balance. For example, there are over 100,000 games in the CCRL-FRC database now, what are the proportions in each database of 960/traditional games that feature unusual midgames say two knights verses a rook and pawn? The problem is that the CCRL-FRC database is polluted by engines that do not know how to play the Chess960 opening at anywhere near best practice.

Anyway, here is a somewhat unusual midgame, but it cannot be said that Chess960 created this because the scenario below was not arrived at with best play!


SP425 black to play: find the only drawing move! 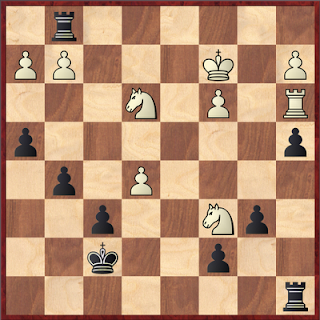 Here is the same idea but arrived at from SP009:
Again, black to play for a draw