Here is the next in a series of trial openings we are playing through for very difficult SPs that black must face. The PGN database for these trials including comments is here.

Well for me personally, this SP number 864 was the toughest SP I have ever had to face playing the black side. I feel uncertain as to black's chances in this SP to draw and there would need to be more work done to convince me that black can find a draw (only my opinion please prove me wrong!)

The good news is that in practical play, black's opening moves are all principled and thus easy to commit to memory and white has to play very precisely otherwise all the initiative dissolves away. In any case even if black is in trouble in this SP, the game will play well beyond 25 moves. Therefore there is a lot of really interesting, creative and fun chess to be played in any case!

Not only is black's right to castle almost completely destroyed within only a few moves, but in this SP white's dark bishop sits in the corner readily deployed on the long diagonal firing at the kingside. Unlike our previous trial where the queen-side sequence was QBB, this time the queen sits on c1 in the classic "barbecue" BBQ arrangement (Weeks, 2012) and thus she has more freedom to move and exploit weaknesses from her c1 home.

Since we had already trialed the QBB version of this SP in trial 8, Mark found a very important improvement with 4.O-O. We both shared a kind of a laugh about our interpretations of this move! I thought of this early castling move as "super-solid" where I actually meant "aggressive". Mark thought I was implying that the early castling move was defensive. However please that it is not! After the castling move, white is free to gradually build up a very intimidating low risk attack on black.

The trial of this difficult SP concluded after 18 moves in some disagreement as to the likely outcome of the game. Mark chess expertise is significant. He gives black only a 10% chance of drawing after 18.d4. I think that this conclusion is harsh but it depends on a specific continuation starting with 18...Nd5 that produces a fascinating defense by black that we never got to play through unfortunately. So I present the hypothetical continuation after the 18th move just for fun.


SP864: How can black improve on this opening?


For me, I did not like this move I played: 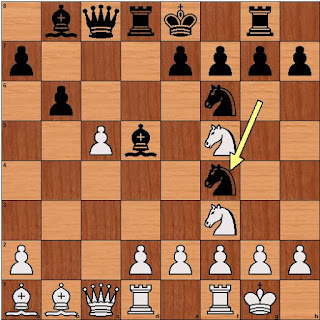 Just from a question of logic, why threaten a pawn that requires white to respond in such a way that white's position is improved? Perhaps better was the immediate move 8...Qxc5. Black is actually trying to exchange off queens to take pressure of his king-side so that the king can lift to the seventh rank and finally connect the two rooks in a hybrid castling arrangement.

Since I feel uncertain about this opening by black 1.Ng3...Nf6, here is what I think might be a better opening: 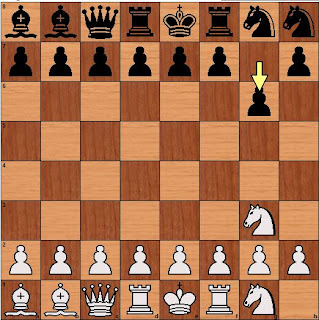 Black's idea is to give up another tempo to retain a king-side castling option and use the two military knights in the corner in a very challenging defensive setup that can protect the king. As we know, knights can be fantastic defenders if they are used well!
Posted by HarryO at 4:24 PM