This SP is part of 108 SP's that feature the combination of a rook, a king and a queen in the corner, leaving most of the opposite side of the board to the minor pieces and a lone rook. Learning the overarching concepts of these SP's will mean that at least 1 in 10 games of Chess960 are covered!

There are so many possibilities in this SP I can only start by analyzing what Mark and I chose for our trial. Please see the comments to this post for a detailed discussion of the reasons we played what we played, as well as some of the interesting variations at the bottom of this post.

To keep it short, Mark played a fantastic defensive move at move 3 which surprised me because the knight blocks the dark bishop. The move left my plan to attack the d-file long term, in tatters: 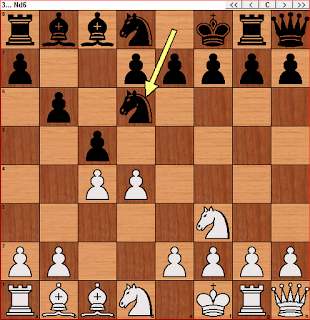 White now starts to get confused about long term objectives. Had Mark not played the move above, I would have exchanged pawns, attacked the rook on a8 and put my own rook on the d-file to attack a future backward pawn on d7, a long term weakness. 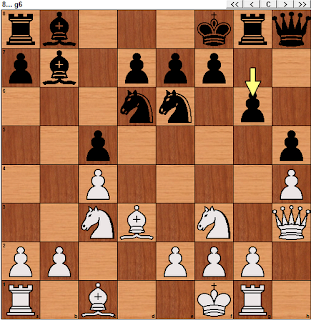 The problem here is that black's queen has more scope even if white's position is more flexible generally. Black now finds a second spectacular defensive move temporarily entombing my queen, which once again left me speechless because I was not expecting it: 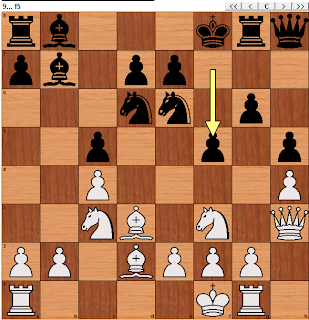 Mark's play as black deserves a lot of study, particularly the moves I have shown above. He deliberately leaves his g6 pawn backwards and this could be an important theoretical point who knows!  The rest of the game we played up to move 20. I found a fantastic double pawn sacrifice to activate my rooks, where I tried to lever my more active rooks up onto the 7th rank and in some lines to attack the backward g6 pawn, but I could find nothing solid that really compensated for the material loss of the pawns. Here is the game up to where we concluded it:

SP468: The opening as we played it
Just to finish up, here are some bizarre lines I found while we were playing this SP!

SP468 hypothetical no.1 - The horses bolt the paddock!?


And another..
SP468 hypothetical no.2 - A hyper accelerated center attack!?


And another...
SP468 hypothetical no.4 - The Bishop and Queen play cat and mouse!


And another!
SP468 hypothetical no.6 - the great g-side implosion!