For me personally, knight tactics are my weakness. This is simply because I never drilled myself in knight tactics problems at chess school. The exact equivalent is a musician that simply must drill themselves in practicing the twenty four major and minor scales fluidly and effortlessly. Without this drilling, in practice I am open to knight tactics almost all the time.

The situation is made worse in Chess960! Why is that? Well it is because almost 50% of all Chess960 game are made up of the Chivalry and Military Knight Combinations that often can attack undefended squares on the opponents 7th rank very quickly either alone or in tandem with the other knight. These knights always do so by exploiting outposts on the opponents 4th rank that are left by incomplete coverage during the opening phase.

So in blitz Chess960 games, here is a simple little pattern recognition tool that I use to instantly work out where the opponents weaknesses on the 7th rank will be relative to a quick knight attack exploitation. 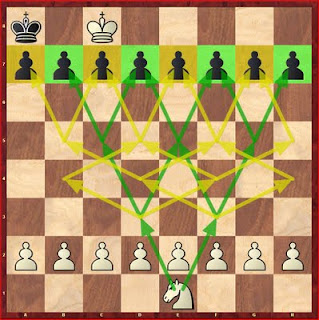 The picture above shows the quickest routes that the knight can take to attack the 7th rank.

The diagram above is a bit confusing so here is a nice simple version of it that I use during blitz games when I am facing Chivalry or Military Knight combinations particularly:
Handy and quick diagram of 7th rank attack squares 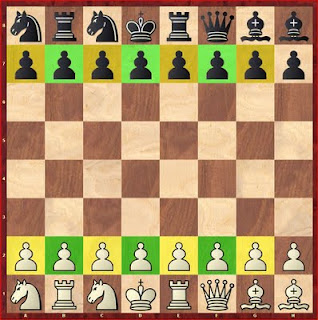 To work out which squares are attack-able in two moves, imagine the green squares displaced one diagonal from the knight and then transform that to the 7th rank. Do the same for the squares that are attack-able in three moves but project from the squares immediately above the knight.
No calculation is required using this pattern recognition technique! You simply know that the diagonal squares to the knight are vulnerable to attack in only two moves! The beauty of this method is that if you exercise it, you quickly determine the undefended squares on the 7th rank as well. Here are a few points to note about the knights attacking the seventh rank:
Hope that helps you in blitz Chess960 games on E-Chess960.com or ChessCube where you have to think quickly in the opening.