Wooow. Every now and then a mid-game position arises that is totally Chess960 specific and is soooooo perculiar but kinda beautiful. Keep in mind that most of the time Chess960 principals are no different to standard chess. It' just that every now and then something crops up in 960 that cannot happen in SP518. When that happens, sit back and enjoy the show.

The main problem I ask quite often in Chess960 is:


When is a Bishop = Rook ?
I've talked about before and that I've also talked about at Chess.com as glider:
http://www.chess.com/forum/view/chess960-chess-variants/does-chess-960-change-the-way-we-play-chess

It's a great topic headlined:
"Does Chess960 change the way we play chess?"

Atos says:
"I think it's just that people tend to blunder more in 960 because the positions are unfamiliar"

Well here is one of those bizarre Chess960 positions! An exchange sacrifice has taken place and white is up a rook but down a bishop....exactly what Nonowho has noticed. The point about this position is that it shows us how the Chess960 jungle sometimes confuses the relative strength of pieces when pieces get blocked up, hemmed in, rendered useless or just can't get into the thick of it in time. This position is totally unique and cannot happen in standard chess. You would think that black's knights blocking the centre pawns is bad. You would think that white could castle g-side and release the h1 rook. You would think that it is reasonable for white to get rid of black's dark bishop and simplify.

So on and so on! I won't paste the whole game because it's not that instructive. However the way that black's rook got nuked was that it captured on the c-file, got captured itself by a bishop and that bishop was cleaned up by one of black's knights!..... 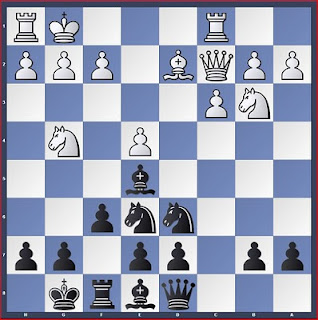 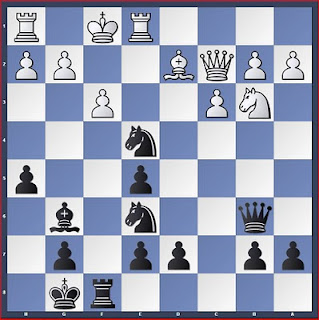 The rook became a "suicide" piece chasing and attacking black's queen without care. Optically it looks like the black queen should capture the rook and kill it mercifully! But the point is that white's active rook is essentially a zombie piece. So in this variation overall:


(  Thinking about the "zombie" rook a bit more, the actual reason why the tactic works is because black needs to continue to direct the affairs. If the black queen captures the rook, she gives white the move. So the queen prevents that by withdrawing to the protected square of e8 knowing that the white rook will chase her down there (white doesn't have an option). However by arriving at her e8 home under guard by her f8 rook, black is then able to be the first to capture a queen with BxQ and in so doing eliminating the problem of that undefended bishop on g6. Chess tactics fundamentally are about achieving more than one thing at a time. What is so beautiful about this tactic is the way that the black queen must die deep in her own territory on the royal e8 square.  )
That line is just one tiny variation that gives you some idea of the bizarre features of this specific Chess960 scenario. You can load the position into the computer yourself by pasting this FEN code in: 3qbrk1/pp1pp1pp/3nnp2/4b3/4P3/1NP1N3/PPQB1PPP/2R3KR w HC - 0 11
Hope you enjoyed that rook chases queen tactic! Do not fret if you don't understand (I don't either it's just that I am using a computer like a microscope to gaze down into the position). Like I said the Chess960 jungle can be bizarre at times. Ok the answer to the two questions above are:
Posted by HarryO at 9:20 PM