Just a quick response to Mark's blog over at:
http://chess960frc.blogspot.com/2011/04/parallel-games.html
SP779 is interesting because a bishop lines up against a queen. The games given are high quality and do not contain any tactical blunders, which makes their study so much more beneficial.

SP779: Game 1
SP779: Game 2
Mark asks the good question whether there is something in the way that the players played the opening of SP779 that caused black to loose both games. I think black resigns in game one because of a midgame strategic error, and black gives up in game two because of a structural weakness on the g-side that forms quite early. What will be interesting is to see how black can better develop, than was shown in these two games.

The suggestion is that black should avoid exchanging off the dark bishop if the intention is to castle c-side. If it is exchanged off against white's dark bishop, then black should keep control of the dark squares on the g-side with his queen, or exchange off the queens with the g-side pawns intact. If you think about it, it makes sense. The white queen is on a dark square and thus without a dark bishop competitor to her, she can threaten to roam freely on the g-side harassing the pawns there. 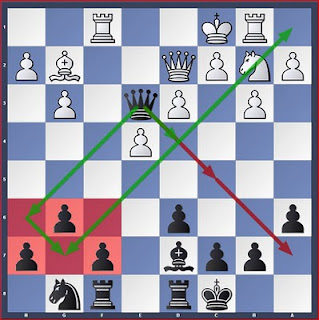 The red lines show where black's queen ends up in the game. The red squares show where black's weakness is. Black should have stayed on the dark squares anywhere along the green line at h6 or d4. By doing that he keeps his queen active and defending his weaker g-side pawns. He could have also simply exchanged off the queens but that is not as good because it gives white two developing moves, centralizing the king and connecting the rooks on the back rank. In the actual game black's queen ends up being deflected to a7 and is completely out of play. Without an active queen, it is hopeless for black.
Game 2 was more interesting to trace back where black goes wrong. I believe the error can be traced back to the early phases of the game.The diagram below is the penultimate moment where the wheels fall off for black.
Game 2 - SP779: 19....Qxc4 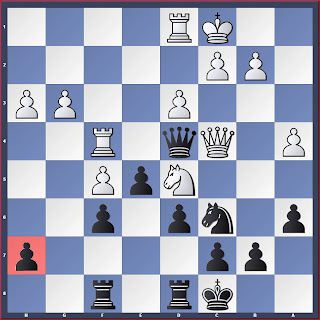 Black has an isolated pawn and should have tried to avoid a queen exchange simplification before arriving at this tactical situation. White's rook cannot be captured because by doing so black put's all the responsibility of protecting the queen onto the c6 knight, but white plays Ne7+ which requires a forced response and demonstrates how overloaded (overworked) the c6 knight becomes.
19.       ... exf4??
20. Ne7+  ... Kb8 (NxN??)
21. Nxc6+ and black's queen is dead
or)
20. Ne7+  ... Kd7?? mate in two
You would think that black could still draw even with the isolated pawn issue. I guess that matters continue to deteriorate for black when white sacrifices the a-pawn to deflect black's knight to the edge of the board for more initiative on the g-side. White also has the freedom to move his rook laterally along the 4th rank to attack the weak g-side. I think that the main issue is regarding the formation of black's isolated h-pawn. How did that happen?......
Game 2 - SP779: 8....Nh6?! 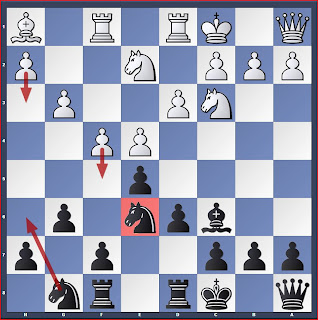 The problem here for black is that deploying a knight to h6 is totally rendered dead in the water by the simple move h3. Yes h3 is on a light square and can be attacked by black's bishop but that is easily defended. With black's knight sidelined on h6, black now doesn't have the time to develop his queen before white biffs his other knight via f5. That knight on e6 doesn't have anywhere effective that it can move to if it is biffed, and so black decides to exchange off the f5 biff with ...gxf5 which then causes black's h-pawn to become isolated. Interestingly, black had a chance to isolate white's h2 pawn earlier on, which he didn't take.
In conclusion, the interesting features of these two games for me, were the contest between the f-pawn and the e-pawn (a feature of both games) and the relative weakness of the g-side pawns. It appears on first glance, that both games show a tendancy for black to be on the defensive because of the g-side pawns needing so much support by the major pieces leaving black no resource to go onto the attack (unless for a blunder). I would suggest that we need to study how black can develop without weakening the g-side pawns. It seems that black should avoid exchanging off the g-side bishop seems to be a good start, otherwise white's queen get's complete diagonal control of the dark squares on the g-side.
Posted by HarryO at 12:50 AM