Ok chill out, relax and simply enjoy the spinning wheel illusion. Notice that the wheel spins consistently while you read these sentences. The thing about standard chess that is missing is this. The generalized form of chess (Chess960) is like a spinning wheel. I'm going to stretch the mind a bit but think of the starting positions of Chess960 like an integrated system of positions that are like a wheel that is spinning really fast. This idea is just a creative analogy.

Now imagine that the wheel is just slightly out of balance because white plays first. If the imbalance is not addressed in each specific starting position, the black player suffers for the vibration only a little bit or so drastically that the entire wheel flies apart. But if black addresses the imbalance with just the right counter weight, the wheel spins absolutely perfectly all the way to the end of the game. It is in black hands! They are the one that must restore balance in the very slight imperfection of the Chess960 opening. Symmetrical moves are the way that the concept of the spinning wheel of Chess960 can be appreciated. Remember that it is only a conceptual tool to help with being imaginative and creative.

A couple of posts ago I showed what happens in some positions when both players play symmetrically but no tactical problem emerges just a positional issue for black. Here at SP145 we get to see what happens when the spinning wheel ruptures! SP145 is a classic SP on so many levels. Here are the highlights: 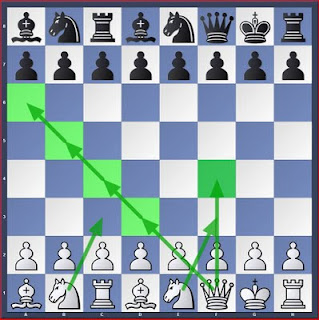 The green squares show the path that the queen can take with safety in many configurations. She can actually come out early and restore balance for black if needed! She acts a bit like a counter weight on a wheel. Try to follow the reasoning as to why each green square is possible for the queen. The reasoning has to do with harmonius development:
Because we are all standard chess players, we are conditioned to think that the queen must not come out early. However in Chess960 this starting position amongst others will show that this assumption is wrong.


SP145: The spinning wheel of symmetry that so totally ruptures at high velocity:
SP145: Black adds a counter weight to restore the balance of the spinning wheel!
Here are a few ideas to contemplate:

Just analogies and curiosities. There are so many aspects to this amazing SP. I simply cannot go into them all.
Enjoy
Posted by HarryO at 3:19 PM