Just a nice "simple"!? little tactic that I overlooked today! Don't cheat and do not stress if you don't see it - it's really simple once you see it but it's one of those typical "computer" discovered tactics that I tend to discover after the game in analysis. The clue is too look for all the undefended squares or under-defended squares in white's position before you start calculation. Once you find them, note down their common element. This is one of those typical Chess960 "oddities" where black wins something more than mere material: 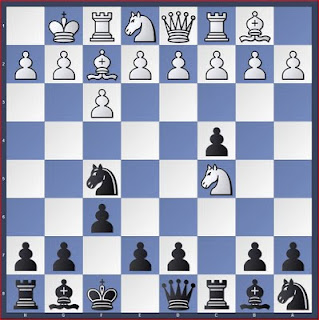 White's un-defended and under-defended squares are:
The common element that binds them is that they are on dark squares. The answer is hidden somewhere on this page.