Not sure if Chess960 was the cause of this odd midgame situation or not (see the end of this post)! Some scenarios are so unusual that it's best to record them down somewhere because it's possible you will never face them again in your life! Here is one such midgame I got into.
Let me say that this position is so uncomfortable for me as black because I have difficulty visualizing how two opposite coloured bishops can compete against the two rooks. Doing a bit of analysis on the computer about this situation, many lines seem to revolve around an incredible swarm of pieces on white's king where black must use every piece including his king to force white's king out into the open! The first standout feature is that ...Kg5 is a little safe house for black's king that begins such a swarm. The swarm is necessary not to affect a win, but to cause a draw. All black's minors must cooperate with each other and not only threaten to attack, but shield the king from checks by the rooks. It's pretty tricky stuff.
Black to play and find the only move that retains initiative 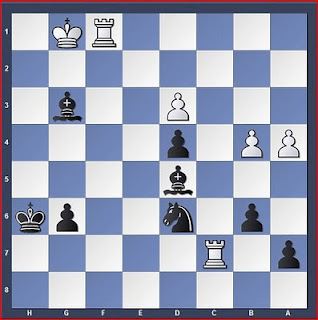 Black must do something about the backward a7 pawn otherwise white will get a single passed pawn and can use both rooks in cooperation to queen the pawn. But what should black do?
38... Nb7? 39. Rd7 Bc6 40.Rff7! Bxd7 41. Rxd7 Nd6 42. Rxa7 and white's queening threat put's black in some hot water
Ok so here is the amazing line!
38. ... Nb5!
39. Rd7 Nc3 from this outpost, black has many ways to retain initiative
40. Rxa7?? Ne2 mate!
Alright so I ask the big question. Is it possible that such an unusual midgame was more likely to emerge because of it's particular starting position? Here is the starting position that this midgame emerged from:
SP119: A Suffragan and Archbishop combined with Chivalry Knights 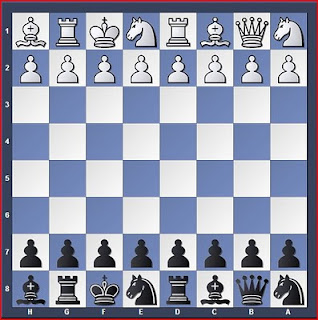 The feature of this SP is that in Naming the Bishop Pairs one of the bishops (The "Suffragan Bishop") is quite likely to remain on the long diagonal for a long time, while the other bishop (The "Classic Archbishop") does not seem to come under any attacks from the knights in it's most likely direction of travel. (Visualise the Archbishop and where it might go and compare it with where the knights will try to strike at it). According to Naming the Knight Pairs we see that in this SP we have the "Chivalry Knights" starting on light squares (for black). I think that is a clue! The Chivalry Knights play out and control a 7x5 area but struggle initially to attack their opposite color. This SP might encourage both bishops to remain on the board for longer.
In Chess960 my biggest question fundamentally revolves around this:
When does a bishop become as valuable as a rook!?
This SP might help to answer that question.
Posted by HarryO at 3:09 PM