Chess960: The territory of the Chivalry Knights

The Chivalry knights are great gallopers that can quickly confuse and demoralize an enemy. You can imagine that their speed is fantastic but because of it they have blind spots directly adjacent to them. They start on the same color squares and this is what really distinguishes them from the other knight pairs. When developed to the third rank, in just one move they can theoretically cover an exact 50% of the area of the board ((35sq-3sq)/64sq))  in a perfect 7x5 rectangle (except their blind spot squares): 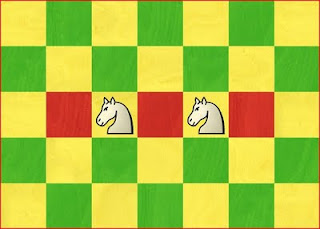 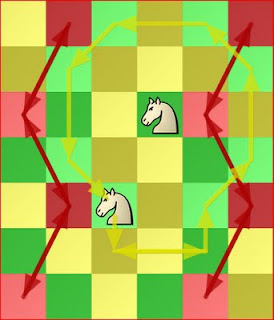 The green squares show the squares that are immediately covered. The yellow squares show the squares that can be covered in one move. The red squares can only be covered at the very least by two moves. So their primary area of influence is a bit like a light bulb shape (yellow lines) with some warning "electricity bolt type "zigzags" either side (red lines). When they are locked like this, specific calculation of what they can do is required as well as a general feel for their area of influence.
The "Locked" Chivalry Knights rank and file influence in one move: 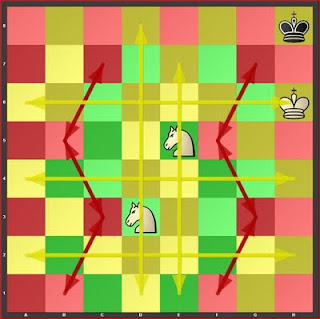 You can see that within a single move window, they can actually cover three whole ranks and almost two whole files in an "electricity pole" shape (yellow lines). Since when the knights are locked together the coverage area is not a simple shape, specific calculation is required as well as a general feel for what they can do. As you can see there is a lot of territory that they can cover in one move.
Another particularly confusing arrangement that the Chivalry Knights can quickly posture into is an orthogonal Military Knight stance. When you are looking down the barrel of that stance, it can get optically confusing and can startle the enemy into a tactical error:
Chivalry Knights in Orthogonal Military Knight Position -
a 5x6 "Split Dome of Protection" 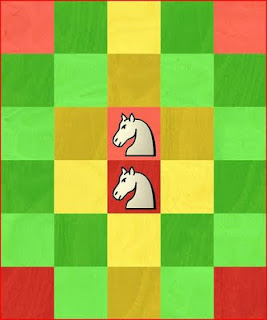 Although they are extremely vulnerable to rook attacks because of their severe vertical file weakness, in this orthogonal Military Knight posture they cover the green squares immediately, the yellow in one move and the red in two moves. Therefore their green area is almost a complete 5x6 area dome of protection other than a slice right down the middle. Without knowing this, our human eye tends to think that they have many more weaknesses than this arrangement actually shows them to have (we assume that they have the same incomplete coverage as a single knight). In this posture their adjacent square weakness is only a minor weakness and once again they have trouble getting to their long diagonal squares which is the main similarity with their single knight form.
Here are some practical examples:
Black to move: 5 seconds to find the right move 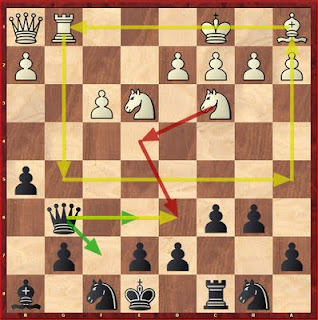 ....Qf7 why? For every move, try to find at least two things that the move accomplishes
The Orthogonal Military Knights startle the enemy and cause a blunder!
Why am I going to all this trouble? Well with us humans, we both recognize patterns and we calculate. In future generations when kids have grown up playing Chess960, they will instantly see the coverage area of the Chivalry knights and they will instantly see what squares those knights can attack outside of their area. At the same time they will still calculate specific lines. It comes down to efficiency of cognition. Kids of the Chess960 future will build opening concepts, themes and lines around the various opening configurations of the chess pieces. All of the Chess960 openings will be familiar to them conceptually.
Realize this about our old beloved SP518 classic chess position.  If you look at the knight configurations, we do not often see Chivalry or Military knight configurations. Play around with SP518 knight movements and you can see it for yourself. There is a whole tactical set of themes missing in the SP518 setup that we only see if we play Chess960. Realise that Chess960 includes SP518 and other positions that are probably just as beautiful and just as deep.
Posted by HarryO at 5:43 PM