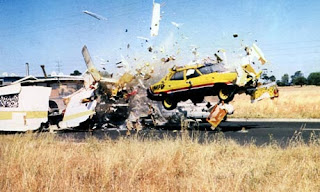 
Here's a thread on some of the totally trashed and ridiculously bad Chess960 openings that I have played so many times! Embarrassing but I save face by saying that they were 15 minute games where white's timer was ticking down immediately at the start of the game and so I was under some pressure (as white should be!). I'll be using terms from Naming the bishops and Naming the knights because I find it really useful to put a name to the particular characteristics that the minor pieces have in 960.
SP167: How white should NOT play the opening! 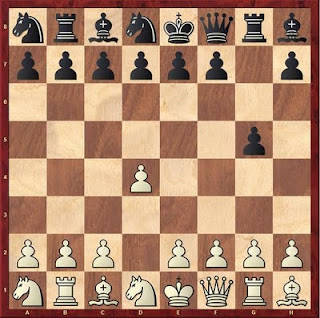 1. d4...g5 Ok d4 is not too bad opening up a line for the archbishop on c1 but it puts white on the defensive straight away. Black's g5 has startled me although it shouldn't have. Immediately black is attacking the undefended pawn. Black's g5 is a great move because now white cannot develop the suffragan bishop via g3 without opening up all the light colored squares on the g-side that black's archbishop can quickly and effectively exploit. 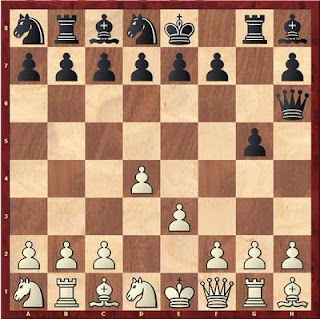 2. e3?! ... Qh3!? Now e3 is incredibly timid and a structurally bad move and any plans white had for the center are over. What was I thinking? I thought it would be good to release the queen on f1. I didn't want to block the long diagonal with e4. Black has startled me with the pestering annoyance to capture h2 but it is just a smoke screen. I should have listened to my own advise and simply not worried about h2. If black takes it, they will have wasted a lot of tempo and their own h-pawn will be weak in any case because the h-file opens. Not only that but their queen would be over-committed and exposed. White can castle c-side and so it really is no big deal. The essential issue is that what has happened to white's initiative? 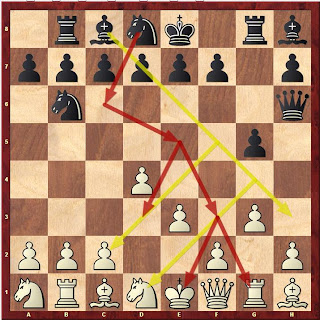 3. g3?! ... Nb6 And now is the coming of the car wreck for white. The central feature is that white has setup a terrible hedgehog pawn structure which creates a huge number of weaknesses that blacks archbishop and d8 knight can exploit VERY quickly. Black can play the central pawns out with initiative and white has nothing. They can't even play the pawn out to e4 because they wasted the time moving it to e3.
4. Be4?! ... d5 White decides that they are going to actively deploy the bishop and that transferring it to d3 looks fine because it doesn't impede the knights in any way and there are lots of interesting lines for at least one bishop. But the stupidity is that it only encourages black to play d5 and causes white to waste a tempo on realigning the suffragan bishop.
5. Bd3 ...Nc6 Essentially the game is already over for white. Aside from all the other problems, now the d3 bishop block's the queen's active release. The point is that there are not and never were going to be any useful targets that white could hit on the f1-a6 light diagonal. 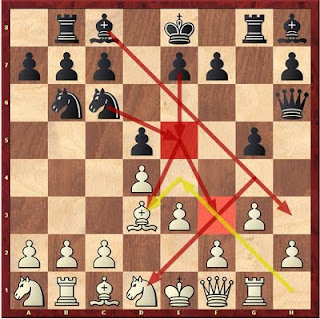 6. Nc3? ... Bh3 White thinks that it is no big deal if black biffs the queen with Bh3 because white can play Qe2. White is oblivious to the arrowed lines of attack that black has, particularly black's c6 knight and black's central pawns.
7. Qe2 ... e5 Black now threatens to put his knight on e5 at some stage.
8. Nb3 ... O-O-O Black is in total control of the center and also the g-side wing.
9. dxe5 ... Nxe5 and now black's knight threatens to remove the light coloured bishop which leaves all the light squares on the g-side undefended, or instead black's e5 knight sits where it is threatening a fork on f3.
Aaaggh. Crash! (Good fun)