Thanks Mark for that wonderful example: Watch out for KRBN!. As pointed out the SP301 combination doesn't happen often in Chess960 (roughly 2-3% of all games). So I decided to take a look at this extreme example from the point of view of a possible general opening theory in Naming the Pawn Moves.

What I found is pretty interesting! The move that the CCRL engines did not play very often was 1)....e5! an absolutely striking example that I'll examine a bit more. I think what happens with the 960 engines and I see it a lot in Rybka. They get fixated on a specific line and don't come off it. With human intervention it is amazing to see how they then recalculate their lines as if the engine says "oh right ok, I didn't properly evaluate that idea thanks human!". You even see that change of mind in quite a few mid-game situations that are positionally oriented.


SP301: Black plays according to solid theory
The main point is that the idea 1...e5!? actually follows opening theory. I'll explain it below:

3) Nh6 ...      White gifts another tempo to black by attacking the bishop
... f5   Black plays another gift "free pawn move" from the spare tempo
4) NxB ... RxN  A neutral tempo exchange. It will be hard without the bishop.
5) c4  ...      White plays their first theory allocated "free move"
... Nf7  Black plays a knight before his second allocated "free move"
6) Nc3 ...      White plays out a knight according to theory
7)     ... a5!  Black plays their second theory allocated "free move"
Black has a playable game well done!
I think that a5 is a great move. What it does is prevent the coming of a massive pawn storm that white will unleash on the c-side after white castles g-side and black castles c-side (formely known as queenside). It also gives the black queen an alternative development path. (I actually doubt that black needs to castle at all but that is another story).

But the real point is that black has played according to theory. Black played out a total of four free moves but two of them were freely gifted to black by white in the tempo that white expended chasing down black's metropolitan bishop (Naming the Bishop Pairs). Not only that, but black played out a knight before his second theory allocated "free move" (the other "free moves" were not forced and were temporal intermediate opportunities).

The pawn storm that I am talking about is listed in the alternative lines above but you can see the result of it here if black does not subdue it with his free move 7) ...a5!
SP301: White pawn storm on the c-side king (black to move) 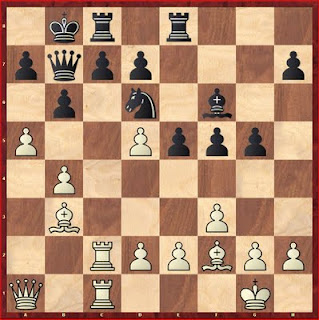 In summary, I do think that these 2-3% of positions are about black finding a way to draw. But heck does it matter? It's a lot of fun in the meantime considering that there are 960 different starting positions. There are some surprising resources that black actually has! Haven't even touched on some of the others.
Enjoy 960