Got into another drama with the Chivalry Knights the other day. In the diagram below, see if you can predict where black can stuff up here because of white's early developed Chivalry Knights. If you don't know what they are check out Naming The Knight Pairs.

Basically, the problem is that I neglected the reality that not only can the Chivalry Knights quickly move forward and attack a weak seventh rank square if the opponent is not wary, they can also quickly move forward and switch to attack a weak sixth rank square! Notice that in the diagram below, the knights actually have powerful forks if they can get to the highlighted red and yellow squares and black has fallen asleep:


SP603 black to move: be a bit careful to avoid a trap on the 6th rank 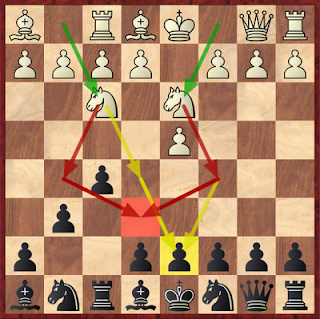 I know a few people have said that the chivalry knights are a problem because they can't easily move forward being on the same colour squares and thus blocked more efficiently by a single pawn. But boy can they come to life when the opponent is not watching out for them.