Played an SP141 Chess960 game the other day. So often when playing quickly as white, I'll play 1.e4 as a knee jerk reaction! After all it is the famous King's Pawn Opening in traditional chess isn't it? The problem is that in Chess960, 1.e4 can have a bit of a nasty sting in tail for white! Here is an example: 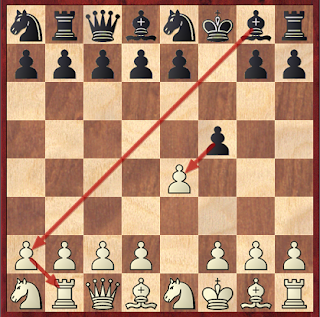 The classic scenario simply goes like this:
I cannot tell you how many times I have played e4 to find this scenario or similar cropping up! So here are some stats for the scenario and how often to expect it. Notice that the theme crops up in batches of three consecutive SP's in a row? I've included quick computer checks of exactly the same King's Pawn Opening opening sequence from above, noting their approximate severity:

Basically the underlying pattern is this:
I actually quite like the Chess960 numbering scheme because of the way that themes like this play out in consecutive batches of SP numbers. Makes for interesting studies by consecutive SP numbers.


Chess960 insiders tip!:
If you are playing white and you knee jerk 1.e4 only to realize that black can counter attack on the edge pawn and your rook on b1, don't panic! Just continue playing the opening calmly, because out of all Chess960 positions, the situation crops up only 4% of the time, and when it does, 1.e4 is only dubious roughly 33% of the time and it is never fatal!

Why do people still insist on playing traditional chess?? Analyzing the patterns in Chess960 is a lot of fun.