Thanks to onlinechesslessons.net I came across a really interesting bishops in the corner game played between Sergei Movsesian (2771) vs Viktor Bologan (2702). White has played out the queen early and black's response was 2....Ne6 preventing any problems later if Nxc7#. However black had another idea that Viktor did not choose: 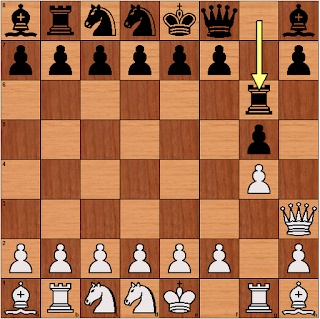 In the actual GM game, white's idea was to continue the long lasting stress on black's weak kingside and simultaneously push for control of the center to make it difficult for black to develop the knights. Black doesn't want to exchange off the bishops because this would prevent castling later. Black decided to develop the knight to e6, but this invites white to start a center pawn push via e3/d4 threatening to biff the centrally developed knight. So what can black do? There are various options but there is one very interesting idea that needs a bit of analysis!

Enjoy 960
Hint: ...Rh6 attacks the queen and the h2 pawn and the rook is developed and safe.
Note: the concept is that if white has wasted a developing move with Qh3, black is entitled to waste one as well!
Posted by HarryO at 4:28 PM