Chess960: When the queen comes out early

Found a brilliant example of a start position where the queen can come out with attack as soon as the second move. The amazing thing is that there is no way to attack her and she is immediately putting pressure on the opponents position: 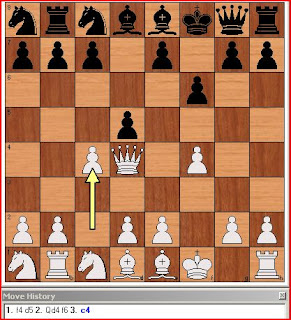 White starts with the Birds Opening System 1.f4 except here this opens a line for the queen to come straight out into the middle of the board. White follows up with the strong move 3.c4!? which achieves multiple things:
I haven't seen such a clear example like this before for bringing out the queen early with no cheap way of counter attacking her. Black has plenty of options, but it is an amazing little start position #169 that's for sure! It all stems from the pin on the d5 pawn against black's dark bishop.